You are here: > Hawaii – An Island Overview

If you are like most who have never been to Hawaii, the state’s islands blend into a mass of unpronounceable vowels and indistinct images of a tropical paradise. The geography of the islands is not difficult, however, and all it takes is one trip to make visitors long to become experts. So if you have never been, or if you have only been to one island, this introduction should whet your appetite and familiarize you with the islands and their most important characteristics. Perhaps the most amazing fact you’ll find is how close and reasonably priced Hawaii really is. Long thought of as a distant playground for the wealthy, Hawaii is less than 6 hours from the west coast and terrifically, wonderfully affordable.

Most do not realize that Hawaii’s islands span more than 1,500 miles, creating the longest chain of islands in the world. In total, Hawaii is actually 130 separate islands if you include the atolls and coral reefs above sea level. However, the eight of these islands that cover 99% of the land area receive all of the attention, and of those, only six offer tourism opportunities (Niihau is privately owned and Kahoolawe was once a test range for the US Navy). The six major islands are Kauai, Oahu, Molokai, Lanai, Maui, and Hawaii’s Big Island. Each island has its own identity, ambiance, climate and geological features that make it unique. The Hawaiian Islands are volcanic, the products of millions of years of undersea eruptions; today, however, the only active volcano is on Hawaii’s Big Island. Hawaii’s climate is an amazing phenomenon, as well. Climatologists will tell you that the earth has 13 types of climatic conditions, and of those, 11 are represented on Hawaii – the only missing conditions are Arctic and Saharan. At sea level, summer temperatures average 80 degrees Fahrenheit and in winter, a balmy 75 degrees. Year round, the average water temperature is 74 degrees. Getting around on the islands is a cinch. A ferry runs between Maui and Lanai and Maui and Molokai, and inter-island flights on both Aloha and Hawaiian Air offer multi-island passes at a discount. Another small commercial carrier, Island Air, flies between the smaller airports on the islands. Most visitors relish self-drive adventures, touring the winding roads along the beaches or into the interior of the islands at their own pace. Rental options range from scooters to Ferraris, but for a classic experience, try renting a Jeep. 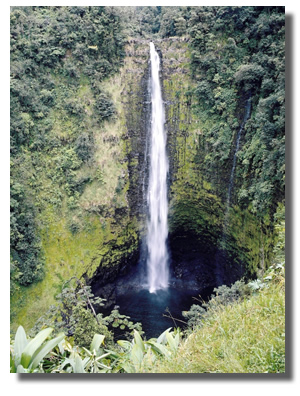 What’s truly unique about Hawaii, though, is the sheer number of activities available in such an amazingly beautiful setting – the scenery is unmatched and unlike anything in the world. Mountains and beaches, tropical rainforests and snow. Pineapple plantations and volcanoes. Sit and do nothing, or try just a few of the built-in diversions that nature has given a home here: water sports like surfing, windsurfing, boating, sailing, snorkeling, diving, fishing and kayaking; or try golf, tennis, world-class bicycling, hiking and camping. The islands are also home to an entire health industry, with internationally recognized spas, yoga and holistic centers throughout the state. And Hawaii takes the precious gifts that nature has bestowed very seriously, so ecotourism is practiced with a particular zeal here, and many tour and local guide companies offer programs designed around the islands’ flora and fauna. Geologists say that Kauai is the oldest island of the six tourist islands. The rugged coast boasts more miles of beach and hiking trails than all the other islands. This is the island serving as a backdrop to many films, including Jurassic Park. Its primitive, tropical beauty evokes the Garden of Eden – it is an island of mountains and valleys, waterfalls and beautiful beaches. On the Northwest side of the island, 3,000 foot cliffs line the Na Pali Coast, much of it inaccessible except by boat or hikes on foot. The island is circular in shape, offering five areas developed for tourism. This well-rounded destination appeals to commercial shoppers, fine diners, and eco-tourists alike. 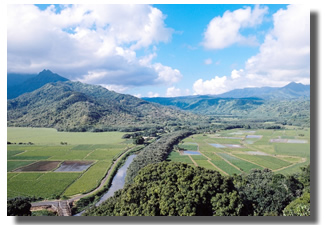 Oahu is the most commercial of the islands, and home to Waikiki and Honolulu. But do not let that fool you: Oahu mesmerizes visitors with rainforests, mountains, valleys, and spectacular ocean waves. A great suggestion for any island newcomer is to rent a car (an open top is ideal) and drive the perimeter of the island – you may well be awed by how undeveloped and quaint much of the island remains. Honolulu, on the southern tip of Oahu and bordered by both mountains and ocean, is actually one of the largest cities in the United States and home to near 80% of the Hawaiian population. Waikiki is famous the world over, where urban culture and the distinct Polynesian flavor of Hawaii co-exist in perfect harmony. Diamond Head, a mountainous volcanic crater, is a famous and easily recognizable landmark. Words most often associated with the island of Molokai are peace and tranquility. Molokai is home to many of the ecological and adventure-oriented activities found in Hawaii. The eastern side of the island is very green and tropical, and the western side, in contrast, offers dry grasslands and beaches. To the north, tall sea cliffs rising more than 3,500 feet above sea level look out over the ocean and create Hawaii’s tallest waterfall. The Kalaupapa Peninsula is considered one of the state’s most beautiful areas and is ironically the former home of the island’s famous leper colony, bordered by high, sheltering cliffs on one side. The main “urban” area is Kaunakakai, a town with no traffic lights. 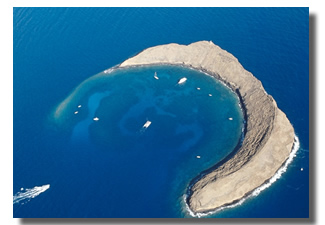 Lanai is a largely rural island, sheltered from the leeward winds by Maui, some nine miles away. There are only 32 miles of pavement on the island, and much of it is given over to luxury resorts, golfing, and activities for adventurous personalities, and it is oft-considered the Hawaii’s best snorkeling and scuba diving spot. Lanai was at one time a giant pineapple plantation and is home to some of Hawaii’s most famous beaches, such as Hulopoe Bay. The only town on the island is Lanai City, a quaint town filled with small shops and artist studios. Lanai entertains many visitors with large luxury resorts and their attendant championship golf properties. The island of Maui has something for everyone. The dormant Haleakala volcano (though officially classified as “active”) and Kahalawai volcano watch over Hawaii’s second largest island and shape the island’s mountains, valleys and waterfalls. Visitors to Maui are surprised by how undeveloped most of the island feels, and yet how much it offers in terms of dining, resorts and nightlife. Maui is also the whale watching center for the islands (the humpback whale is the state animal). Driving to the top of Haleakala to watch the sunrise is a Maui visitor ritual (many opt to bike back down from the top), as is a drive around the island’s perimeter on the 50 mile Hana Highway. Another attraction is the small village of Lahaina, full of great shops and restaurants. 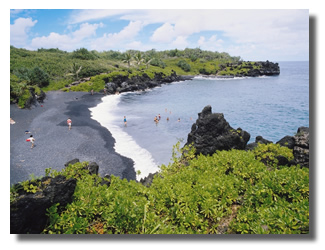 The Big Island is the home to the Kilauea volcano: the still active, currently erupting volcano is the most active volcano in the world, with a continual lava flow pouring into the ocean since 1983, creating approximately 40 new acres of island every year. The Big Island is as large as all of the other islands combined, with more than 260 miles of coast. During the winter, it can actually snow on the island’s tallest mountain, Mauna Kea, and you can snow ski on its 13,796 foot altitudes, weather permitting. The Kona-Kohala Coast on the Big Island hosts several luxury resorts and golf facilities along with its white-sand beaches. Here, too, is the town of Hilo, displaying its tropical, quintessential Hawaiian culture. Again, this overview is just a start at describing the amazing destination of Hawaii. Its cultural and environmental significance can only be fully understood through a visit in person – to see is to believe. Once you are there, consider leaving the beaten path to explore the lush outdoors of America’s 50th state. By TRO

Enquire Now
Our Travel experts are ready to help. If you would like us to call you back please let us know a convenient time (and your phone number).

What our Travellers say

0 Comments on "Hawaii – An Island Overview"