You are here: South-East Asia > Indonesia

Of Indonesia's 50 national parks, 6 are World Heritage Sites, 7 are part of the World Network of Biosphere Reserves and 5 are wetlands of international importance. A total of 9 parks are largely marine. Komodo National Park, located in the center of the Indonesian archipelago, between the islands of Sumbawa and Flores, is composed of three major islands (Rinca, Komodo, and Padar) and numerous smaller ones, all of them of volcanic origin. The dry climate has triggered specific evolutionary adaptation within the terrestrial flora that range from open grass-woodland savanna to tropical deciduous (monsoon) forest and quasi cloud forest. The rugged hillsides and dry vegetation highly contrast with the sandy beaches and the blue coral-rich waters. As well as being home to the Komodo dragon, the Park provides a refuge for many other notable terrestrial species such as the orange-footed scrub fowl, an endemic rat, and the Timor deer. The rich coral reefs of Komodo host a great diversity of species, and the strong currents of the sea attract the presence of sea turtles, whales, dolphins and dugongs. 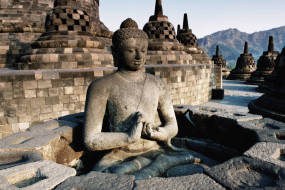 Before you cruise, spend three nights inland, amidst lush rice terraces and dramatic valleys, beautiful Ubud has an atmosphere all of its… 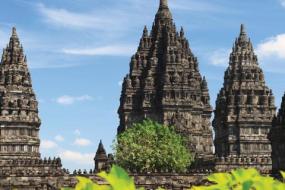 On this trip in Indonesia we explore the exotic islands of Java and Bali. We visit the incredible Buddhist temple at Borobudur,… 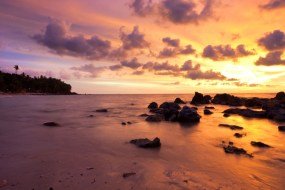 A luxury cruise around Indonesia’s islands is the perfect holiday to soak up the sun, an exotic culture and view incredible wildlife…